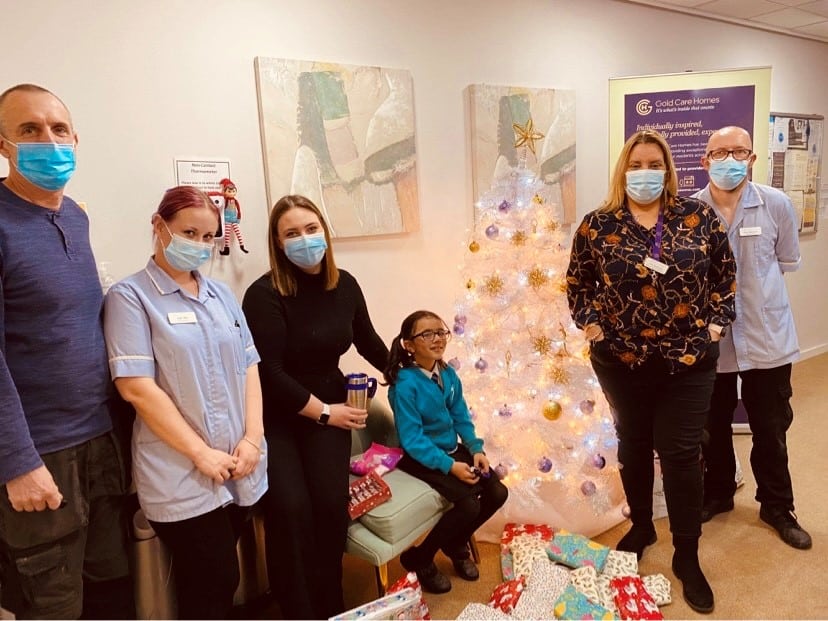 Seher Savannah, an eight-year-old girl from Hemel Hempstead, has continued to warm hearts with her generosity for residents at Queensway House.

This year Seher wanted to ask Santa to give a gift to each resident as she did not want anything herself. She thought about gifts they might like and wrote a list including toiletries, cakes and chocolates and contacted Queensway House to confirm the number of residents.

On Monday 13th December, Seher personally delivered gifts with her Mum, to the team at Queensway House, where they talked about her act of kindness, her life at school and how much it means to the residents. Seher spent some time in the Queensway House Disco grotto area, created as part of a Christmas competition for Gold Care Homes, where residents worked together to create the decorations and take part in singing and dancing activities. 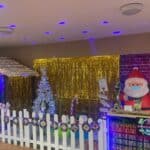 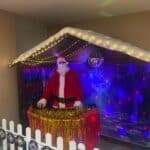 Seher said, “ I love being with old people. They do not have anybody to spend time and have fun with… so I wanted to spend time with them and make them happy … I don’t need anything from Santa because my Mum and Dad gives me things and I’ll be spending Christmas with my family but they won’t have anyone to spend Christmas with, so I asked Santa to give them gifts instead of giving it to me”.

Adrian Pancott, CEO of Gold Care Homes, said: “The thought and efforts of Seher and her family are more touching than we can describe. Gold Care Homes prides itself on our mission of enhancing the lives of those in our care by bringing them joy, happiness and fulfilment; and Seher’s kindness has shown her to be a part of our Gold Care family. Our surrounding communities are incredibly important to us and our residents, and in Hemel Hempstead the community is closely knit together. Supporting each other throughout this year in particular, has boosted the morale of the Gold Care team; and gestures like Seher’s will not easily be forgotten.” 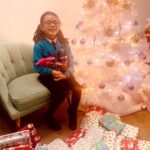 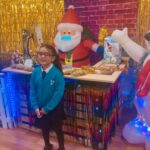 The team at Queensway House were overjoyed to see Seher again as in 2020, Seher was missing her grandparents during lockdown and wanted to do something nice for the people living at Queensway House, the nearest care home to her house.

Seher’s Mum, Sreepriya Bhowmik said, “Her grandparents live in India and she was really missing them so she decided that she wanted to give something to the residents in the care home near us. She said she wanted to give them sweets, or cakes or something and I told her she would have to do something to raise the money, she couldn’t just ask people for donations.”

Seher decided to make candles and sell them to her friends and family for £1 each and used the money to buy ingredients to make the cakes, along with some other bits like juice, tea and coffee.

Seher delivered all the wonderful goodies to Queensway House, along with her parents and one of the residents called her on Zoom so that they could have a virtual tea party. 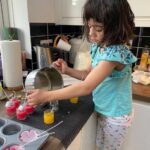 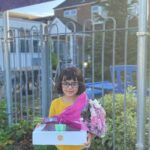 “I’m really proud of her, it is a really kind gesture, and something that she really wanted to do.”

We hope that as Seher grows up, she may consider a future in the care industry, she would be a huge asset and welcomed with open arms. It’s what’s inside that counts.

If you have personal attributes like Seher, are kind, caring and compassionate and would like to be part of creating a caring, fun-filled and vibrant environment and would like to join our team, please contact recruitment@goldcarehomes.com

Queensway House are continuously building community relations which has contributed to the success of being rated a ‘Good’ home in a recent CQC inspection.